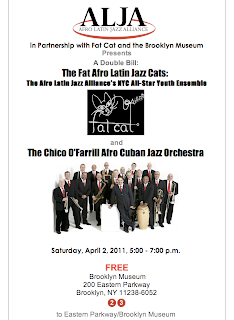 Take the 2 or 3 to Eastern Parkway/Brooklyn Museum

Come out and enjoy music from the Fat Afro Latin Jazz Cats, the

as part of the Brooklyn Museum's Target First Saturdays.

Posted by afrolatinjazz at 2:27 PM No comments:

History of Arturo O'Farrill and the Afro Latin Jazz Orchestra

Arturo O’Farrill was born in Mexico and moved to New York very early in his childhood. Due to his father’s career in music, he was heavily exposed to Latin jazz as a child and has always had a strong connection with music. He casually played piano as a child, but was truly inspired to become a musician by a Herbie Hancock solo from a Miles Davis record that he discovered in his father’s collection. This newfound passion led him to study music at New York’s High School Of Music And Art, where he immersed himself in modern jazz while avoiding Latin jazz in reaction to his father and the social implications of being a Latino. Because jazz programs were not yet conceived 35 years ago, Arturo first learned jazz through actively seeking teachings from jazz musicians in a little club on the lower east side that he and his friends frequented.

In 1979, his passion and devotion to jazz was noticed by Carla Bley, who recruited the 19-year-old Arturo to play at Carnegie Hall and kept him employed for several years. Once he left Bley’s band, Arturo played various gigs throughout New York, while regularly participating in his father’s jingle business. The Cuban rhymes, influence of talented Latin musicians, and teachings of Latin music history from bassist Andy Gonzalez led to Arturo’s peaked interest in Caribbean and Latin American styles as foundations of modern jazz.

With Arturo’s help, Chico O’Farrill recorded three albums, receiving huge critical praise. Trumpet player Wynton Marsalis invited the O’Farrill’s to join the Jazz At The Lincoln Center Orchestra in concert. Arturo addressed Wynton with his desire to form a repertoire band that drew upon the Latin Jazz big band tradition, which resulted in the formation of the Afro-Latin Jazz Orchestra years later. This marked his full-fledged commitment to Latin jazz. He became a high profile spokesman, introducing people to the finest aspects of Latin jazz through his concerts, recordings, education, and more.

However, several years later, Jazz At Lincoln Center was no longer able to support the Afro-Latin Jazz Orchestra, separating O’Farrill’s group from the institution. Arturo was averse to the end of the orchestra, and thus formed the non-profit organization, the Afro-Latin Jazz Alliance. The Afro-Latin Jazz Orchestra persevered and commissioned new works, explored new artistic territory, toured internationally, started innovative educational programs, recorded respected albums, and won a Grammy. Arturo was able to take Chico’s music back to Cuba, and continues to move his group into a promising future. O’Farrill has brought the Orchestra to a place where they do more than simply play great music, they share challenging music filled with meaning and social relevance.

For further information and insights regarding the history of Arturo O’Farrill and the Afro Latin Jazz Orchestra, view Arturo’s 5-part interview with Chip Boaz.

For press inquiries, please contact Chris DiGirolamo at Two for the Show Media, twofortheshowmedia at mac.com, 914 346 8677.